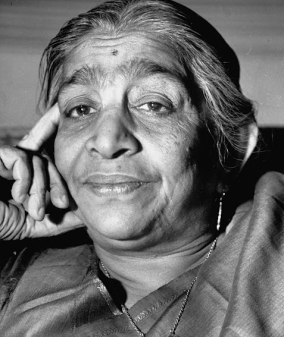 Sarojini  was very knowledgeable in mathematics
and could speak many different languages such as English, Urdu, and Persian.

Sarojini was chosen to attend Madras University at the age of 12. She went on to study at King’s College in London and Girton College (a constituent of Cambridge University). It was at college that she found she had a passion for writing poetry.

In 1898, at the age of 19, Sarojini married Mythyala Govindarajulu Naidu whom she met while studying in England.

In 1905, Sarojini joined the Indian Independence Movement. While working for the Indian National Congress she was introduced to Mahatma Gandhi.

Between 1915-1918, she traveled across India where she lectured on nationalism, social welfare, women empowerment and emancipation.

In 1925 Sarojini became the first Indian woman to be nominated for the President of the National Congress.

In 1943, Naidu was arrested along with Gandhi for being involved in the Quit India Movement. She was jailed for almost two years.

Known by the nickname of The Nightingale of India.

Sarojini Naidu died from a heart attack at the age of 70.