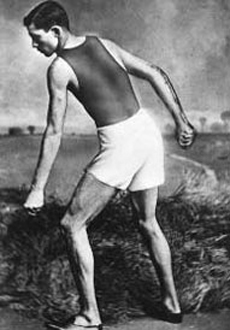 A Little About Laurence “Lon” Myers:
Born to Solomon H Myers who was a clerk.

Myers’s health as a child was poor. After a physician recommended exercising  in hopes of improving his health, he took up running. By his last year in high school he had become a very good runner.

In 1876 after graduating from a Richmond, Virginia high school Myers worked in his father’s business as a bookkeeper.

Myers first running competition was in 1878 in the New York Athletic Club’s Election Day Games where he won the 440-yard dash in 55 seconds.

Myers retired from amateur competition in 1885. At that time he had remained undefeated in the quarter mile run. He earned 4 consecutive Canadian titles and two British titles. And had beat many timing records.

In 1886 Myers professional career began with several races against Walter George from Great Britain. George held every world record from 1 to 10 miles.

Myers and George competed for the Middle Distance Championship in 1886 which was held at New York’s Madison Square Garden. Myers defeated George at 1,000 yards, 1,320 yards and 1 mile and acquired $3,000. While in Australia competing in 1887 George left the competition before it was over after Myers beat him in two races.

Over his lifetime, Myers held every American record for races 50 yards to 1 mile, won 28 national championships and at 11 different distances set world records.