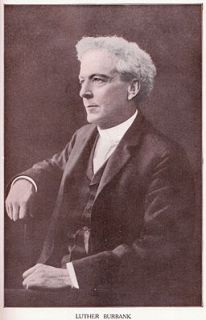 A Little About Luther Burbank:
Raised on a farm and educated through high school.

Burbank took an interest in books written by Charles Darwin, with his favorite being, The Variation of Animals and Plants Under Domestication.

At the age of 21, Burbank bought a 17 acre plot where he developed a new brand of potato that we now know as the popular Russet Potato. For $150 he sold the rights to the potato and traveled to Santa Rosa, California where he settled for the remainder of his life.

He continued to conduct his plant breeding practice with the goal of increasing the world’s food supply.

Burbank was a friend of Thomas Edison and Henry Ford.

In 1893-1901, Burbank published a series of catalogs titled, New Creations in Fruits and Flowers.

In 1927, along with Wilbur Hall, Burbank wrote his autobiography, Harvest of the Years.

His estate, which can be found in downtown Santa Rosa, California is now a Historic Landmark.

Luther Burbank  died from possible complications of a previous heart attack at the age of 77.