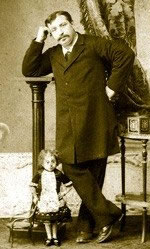 Famous For/Known For:
Smallest mature woman according to the Guinness Book of World Records.

A Little About Pauline Musters:
Born in Ossendricht, Netherlands. She was a little over 12 inches in length at birth.

When Pauline was nice years old she weighted only 3 pounds. By the time she reached adulthood she weighed in at almost 9 pounds.

Her professional career began as a baby when she was exhibited because of her small stature, to the public.

Musters decided to learn acrobatics and dancing as to add to her public performances.

She was known by a few stage names but best known as Princess Pauline.

Musters made appearances in Belgium, Germany, France and Britain.

In 1894 she performed on New Year’s Eve at New York City’s Proctor’s Theater in the United States.

She measured only 1 foot 11.2 inches at the time of her death.

Pauline Musters died from pneumonia and meningitis at the age of 19.